This land is home to over two thousand members of the Tsuut'ina First Nation. Their community borders the Alberta foothills to the west and the city of Calgary to the east. The 25 members of the Tsuut’ina Nation Police Service have sworn to protect their lands and people with integrity, loyalty and courage.

300 years ago, the Tsuut’ina people were part of the Dene Nation of northwest Alberta.  In the late-1700’s they migrated south, eventually joining the Blackfoot Confederacy, a huge social, economic and political partnership of several First Nations incorporating rich and fertile Canadian prairie from the Rocky Mountains in the west to Saskatchewan’s Cypress Hills in the east, and stretching onto the great plains of the United States as far south as the Yellowstone River in Montana.

Literally surrounded by a confederacy of different-speaking nations, including Blackfoot, Cree, Assiniboine, Crow and Sioux, the Tsuut’ina people were determined to hold on to their original Dene language.  As a result, unlike most of their linguistically co-mingling neighbours, the Tsuut’ina language has not evolved much since they all signed Treaty 7 in 1877. Tsuut’ina’s original Dene language is still practised at social gatherings and in ceremonies, and is part of a modern young person’s education right through High School.

Today, the Tsuut’ina are a proud, peaceful and prosperous community.  New schools, new social facilities and a successful Resort & Casino operation have made independence a reality.  Ironically, the biggest challenge to the Tsuut’ina people’s comfortable lifestyle lies, once again, right on their own border.  The City of Calgary, with over two million busy, ambitious inhabitants, has detailed plans and a growing need to expand their own business and community resources.  Highways, housing, warehouses, shops, recreational facilities – all have begun to brush the edges of reserve land.  For the Tsuut’ina Nation, the future will require as much faith, negotiation and mutual understanding as the past.

Bruce Starlight, a respected Elder of the Tsuu’tina Nation is a speaker, linguist, consultant, educator, historian, trainer, coach and visionary who is committed to the documentation and sustainability of the Tsuut’ina language, which serves as a viable link to other Dene languages such as Beaver, Dene Suline, South Slavery, Ticho to mention a few. 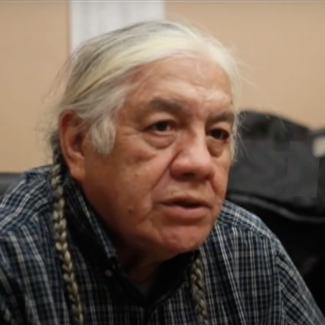 Doubles as Tsuut’ina language commissioner, Bruce Starlight has a track record of working assiduously on a number of projects tailored towards re-recording, re-transcribing, linguistically analyzing and rendering historical texts into usable pedagogical materials in Tsuut’ina language. In the bid to bring these projects to fruition, Bruce applied for the Alberta Multicultural Indigenous Inclusion Grant.

With over 20 years of experience, Bruce Starlight has taught and mentored several linguists and anthropologists from around the world many of whom now unashamedly attribute their lofty heights in linguistic voyage to the exceptional tutelage and generosity of Bruce Starlight

Besides being an erudite academic and scholar, Bruce Starlight is an astute convener of many workshops, seminars and even internationally acclaimed conferences such as the Annual Dene/Athapaskan languages Conferences (1998 and 2013) and Dene/ Indeh Reunification Conference for the members of the larger Dene nation (2019). These epic events witnessed an impressive turnout of enthusiastic participants. As a much sought after speaker and consultant, he has delivered great lectures at various seminars and trainings. Bruce Starlight is extolled by all and seen in the community as a great source of moral and intellectual support and inspiration to budding and established linguists alike.

His work on the Tsuut’ina Dictionary remains a milestone in his career. Worthy of mention is his successful attempt at re-transcribing and re- recording John OneSpot’s stories which was first documented almost 100 years by Edward Sapir. His documentary output is characteristically awe-inspiring and holistic, a masterpiece that speaks volume of his deep, sharp and intuitive knowledge of linguistically different Denes languages.

Besides being extremely excellent at his vocation, Bruce Starlight is a very generous, public-spirited and supportive intellectual who is keen on contributing his own iota to his society linguistically through many ways like sharing valuable materials with others, supporting and mentoring various projects and visions of younger linguists.

He has a track record of working assiduously and resiliently towards the retention and revitalization of Tsuut’ina. His illustrious career has been a source of immense inspiration and impetus to speakers and non speakers through the years. He inspired one of its proteges to create a comparative lexicon of Dene Language and to convene workshops. Hopes are high that someday there will be a Dene Digital Archive available to communities and scholars alike or recordings and analyses of the four and a half dozen or extant Dene Languages still spoken in North America. In the years ahead, Bruce Starlight will be remembered and celebrated by the posterity for preserving the uniqueness and richness inherent in the Tsuut’ina language as well as reinforcing its useful connection to other languages.